A Second Chance at Chilies 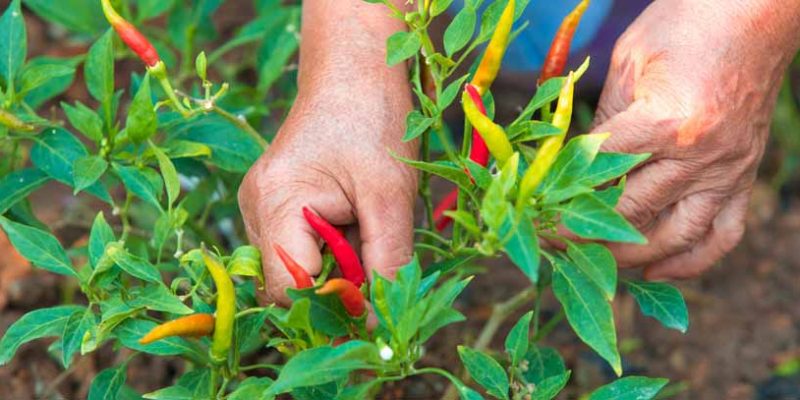 It may be September but if you plant now there’s still time to add chilies to the mix in your edible garden. Some varieties of chili peppers mature fast enough to be planted now for harvest in late October, early November. Read the label carefully on young chili plants to find the “days to maturity” and pick those that are 70 days or under.

Most chilies available to home growers are part of the same vegetable species (Capsicum annuum). Here’s a short list of the pepper families to choose from:

Peppers should be planted about 18 inches apart to give them room to grow. Keep the peppers fed and watered to encourage healthy growth. The creamy white flowers appear first and quickly begin to form the chili pepper. Harvesting can be done as soon as the fruits are formed, even if they are still green. The longer the chili pepper is on the parent plant the hotter it will be.

Whether harvested from your backyard or purchased at the grocers, fresh chilies should be firm to the touch and have a smooth, shiny skin. They will retain their freshness for about a week after being picked. Chilies can be used immediately in foods or preserved via drying, pickling, freezing, or canning. If you want to minimize the heat from your chilies, slice open the pods and remove the inner membranes and seeds.

The flavor of chili peppers, whether spicy or sweet and mild, can be used in endless ways in the kitchen. From the mild stuffed bell peppers to the four-alarm chili, peppers can provide just a touch or a whole lot of spicy flavor.

The source of the spicy heat chilies provide in foods heat is capsaicin, an odorless, colorless substance that tends to cling to the mucus tissue in the mouth creating the hot sensation that is so familiar. A commonly asked question, especially by those who get a little too much capsaicin in their mouth, is “How do I flush it away?” The best thing is to eat a starch or dairy product – rice, tortillas, or yogurt. Avoid salty foods or beverages with alcohol which can have the opposite effect, actually increasing the burning sensation.

Hot or mild, green or red, chili peppers are easy to grow and a treat to have fresh for foods. Buy some plants today and enjoy the flavor.