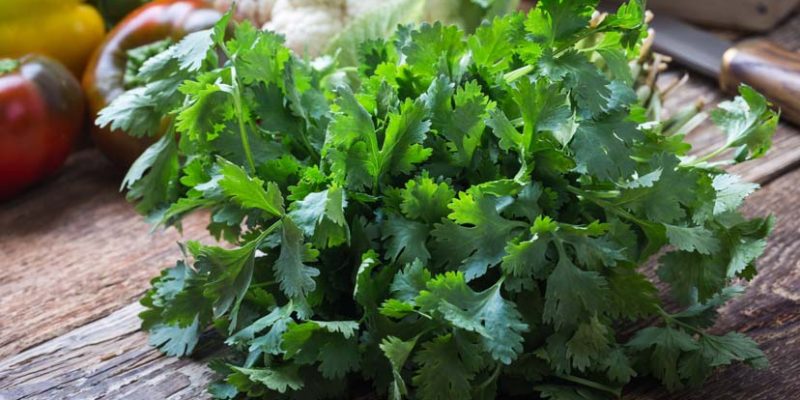 Temptation can strike at the strangest places, even during a foray to the grocery store. Passing bins of apples, grapes, and bananas, I spotted a woman holding a bunch of green leaves with a hesitant expression. She turns and asks, “Is this parsley?”

I know what she’s holding is cilantro, but why not give her a culinary surprise? A wicked voice lurking within urges me to say with a bright smile, “Uh-huh, sure is!” But then visions of angry future confrontations over by the potatoes and onions (which can leave bruises when hurled) compel me to tell the truth. “No, you’ve got cilantro there. Take a sniff.”

My fellow shopper can be forgiven her mistake. The leaves of cilantro do look very much like flat-leaved parsley. After all, these herbs are close botanical cousins. But where parsley leaves a mild, clean taste, cilantro cranks up the heat and makes your mouth say “Howdy!”

The Challenge of Growing Cilantro

Cilantro (Coriandrum sativum) is the Spanish name for coriander, also known as Chinese parsley. It is a short-lived cool weather annual herb that grows 12 to 18 inches high and slightly more than 12 inches wide. In the early stages it produces medium green, finely divided leaves on stalks that rise from a central base. Later, as the weather warms, it sends up a central flower stalk, which produces umbrella-shaped flower heads of tiny white to pink flowers and eventually forms the seeds we call coriander.

It’s this transition from leaf production to seed production that causes so many Southern gardeners grief. Whenever I speak to local groups I am invariably asked by a listener about why they can’t keep their cilantro alive. I’m happy to tell them, “It’s not your fault.” As the thermometer goes up, so does the central flower stalk on cilantro. Leaf production stops as it bolts and sets seed. It’s one of several cool climate plants in the herb garden that won’t survive the 100 degree plus weather of Southwestern summers. Caraway, chervil, and even catnip can show similar behavior.

In hot climates cilantro needs to be treated like a two-season annual. The first season is late February through June. Cilantro produces flavorful leaves during the cooler spring days and then when temperatures begin to exceed 90 degrees it sets seed and dies. By the Fourth of July the remains of the cilantro plant is ready to be pulled up and discarded.

But that’s not the end of the story. Around Labor Day it’s time to plant a second crop of this spicy herb. As fall comes and temperatures cool, the new second-season cilantro plants will grow happily until winter frost ends production.

Since most gardeners want to maximize the amount of harvest they should look for “slow-bolt” varieties, which will increase production by two to three weeks. When purchasing cilantro, take care not to confuse this herb with culantro (Eryngium foetidum), a Caribbean herb with prickly, strap-shaped leaves and a flavor similar to but definitely stronger than cilantro.

Cilantro seeds can be sown in late winter directly in the soil where you want them. Allow two weeks for seeds to germinate, especially in cold weather. Thin seedlings so they are 8 to 10 inches apart. If you purchase young cilantro plants, take care to avoid damage to the central taproot when you transplant them. Water regularly and fertilize about every six weeks to encourage healthy growth.

You can begin harvesting cilantro about five weeks after transplanting. Leaves are clipped from the outer area of the plant to allow the inner core to mature. Continue harvesting until the central flower stalk appears. Once that happens, the leaves become less flavorful.

One of the benefits of growing cilantro is discovering how flavorful it can be when picked fresh. With most of our vegetable gardens still producing fresh tomatoes, there’s still time to make pico de gallo, a Tex-Mex side dish. Take four large tomatoes, dice them, and rinse out the seeds. Add about half of an onion finely diced, a 4 ounce can of diced jalapenos, and a handful of fresh cilantro leaves finely diced. Pour in a tablespoon or two of lime juice and stir well. Use pico de gallo as a topping for tacos, enchiladas, or any food needing a flavor boost.

Cilantro leaves lose much of their flavor when they are dried. Instead, try freezing the leaves to retain flavor. Just clip the leafy tops, give them a quick rinse and a shake, then place them in a freezer bag and freeze. You can then remove portions for later use with the full flavor.

Cilantro is an easy to grow annual herb for our cool weather gardening months. Just be prepared for it to die off during the hot summer months. Plant some today and you’ll have lots of its spicy leaves to enjoy in foods.