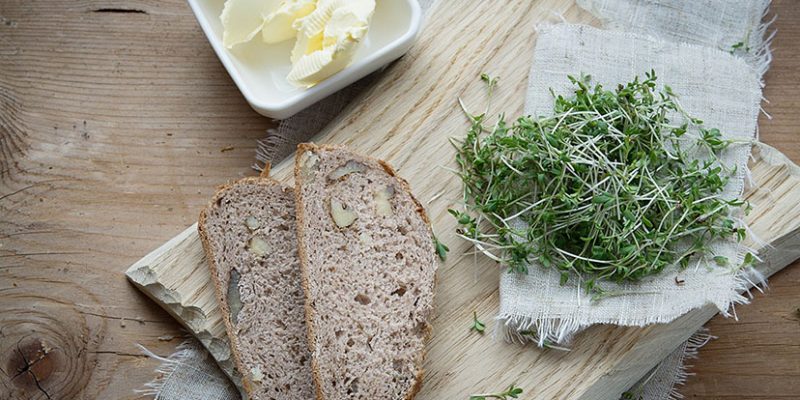 Like me, I’m sure you’ve noticed that breads have been in short supply on the grocer’s shelves. We are fortunate enough to live within a few miles of a major bread maker so, even when the specialty breads are missing, there’s always the basic white bread in the store for which I am thankful.

Ah white bread – nutritious but bland. And when it sits around the kitchen for several days it can get dry and really unusable for sandwiches. Never mind, you can take that slightly dry bread and transform it into savory croutons to season soups or salads.

Croutons are relatively newcomers on the dinner table. The word comes from the French for “crust” and first appeared around 1806. There’s a folk tale running around the internet that says Sir Edgar Crouton, a French diplomat, invented them quite by accident in an attempt to cover up a horrible breach of etiquette while dining with the English king George III. Personally, I think it was some smart cook who decided there should be a way to re-purpose leftover bread slices.

You can easily make croutons that are fresh and nicely flavored with herbs from your garden. Most recipes call for using day-old bread. This takes advantage of the relatively low moisture content of the bread.

1.) Begin with thick slices of flavorful bread. White bread will do (especially in these days) but croutons made from sourdough, rye, or multigrain adds an extra dimension of flavor. You can even use leftover bagels provided they are sliced thinly enough.

2.) Take eight ounces of softened butter and stir in 2-3 finely ground tablespoons of your favorite dried herbs. Here are some good mixtures:

3.) Preheat the oven to 350 degrees. Spread the herb butter on both sides of the bread slices before cutting them into bite-sized squares. Spread them out on a large baking tray or a 9″x13″ baking pan.

4.) Then bake them in a 350 degree oven for 5-8 minutes or just until they begin to brown. Watch closely to avoid the edges from burning. This can happen faster than you think – trust me on this.

5.) Once browned lightly remove the tray from the oven and check the croutons. They should feel crisp and firm. If not, stir and return to the oven for another minute or two. When done, cool completely and store in an airtight container until you’re ready to sprinkle them on your soups or salads.

That’s all there is to it. A few minutes in the kitchen and you’ve transformed leftover bread slices into something crunchy and tasty. I call that a real win.