One of the first herbs I discovered as a novice gardener years ago was sage. Its strong scent and associations with holiday turkey and stuffing made it a favorite for me. But being a herbal novice I hand no idea how many sages there were and how many ways they could be used besides flavoring stuffing. Here’s a quick peek into the world of sages.

Every herb garden needs at least one planting of the classic garden sage (Salvia officinalis), a gray-green hardy perennial native to the Mediterranean. The thick oval leaves of this herb are 2 to 3 inches long with a pebbly texture. The stalks can grow to about three feet, depending on the variety. In late spring spikes of sky-blue flowers appear above the leaves. Sage needs full sun and relatively dry conditions. It is hardy to Zone 6 with protection from frost.

Pineapple sage (Salvia elegans) is tender perennial is native to the high altitudes of Central Mexico and needs rich soil and regular water (especially during summer heat) to thrive and flower. The bright red blooms appear over several weeks in late fall. They are a good source of nectar for migrating hummingbirds and butterflies.

The stems of pineapple sage can help flavor cold summer drinks. The green leaves and red flowers of autumn can also be minced and added to a tasty pineapple pound cake for holiday gift giving.

Greek sage (Salvia fruticosa) has been used since the days of Alexander the Great and the Greek empire. It grows to about two feet tall. It is hardy to about Zone 7 and fairly drought tolerant once established. The leaves of Greek sage are elongated and have tiny side lobes near the base, giving it the alternate name of tri-lobe sage. Greek sage blooms in early spring with pink to lavender flowers. The flowers can be cut and used in fresh arrangements.

In my research I was surprised to discover that about 95% of the dried sage sold in grocery stores is actually Greek sage and not the commonly grown garden sage (Salvia officinalis). Greek sage has a higher essential oil content than garden sage, which would probably give it a longer shelf life.

One of my favorite ornamental sages is Mexican bush sage (Salvia leucantha), a landscaping sage popular in the Southwest. This tender perennial grows sturdy stems from the base to 4-5 feet. Each tip bursts into purple and white flowers in fall. The flowers are much enjoyed by bees, butterflies, and all who pass by. Both leaves and flowers are covered with fine hairs, giving it a velvety texture.

Mexican bush sage is not frost tolerant and will die down to the ground with the first winter freeze. When this happens, clip the stems down to the ground and wait for spring to revive the bush. Divide in spring, leaving at least three feet between plants. This sage grows slowly but steadily through spring and summer until it becomes a flowering hemisphere in fall.

Plant Mexican bush sage where it will receive full sun and good drainage. Keep it regularly watered to sustain its growth. The flowers can be clipped and dried for arrangements.

Clary sage has a long history of medicinal use. It has been used for centuries to combat eye disorders and was sometimes called ‘Clear Eye’ and ‘See Bright.’ A liquid made from steeping clary sage seeds was used to safely cleanse the eye of foreign objects.

In the Medieval tavern, clary sage has been used to flavor beer before hops became common in the sixteenth century. The Germans would also use it as an additive to Rhine wine to make it taste like the more expensive muscatel. Clary sage was said to enhance the euphoria of drinking. Alas, payback would soon follow. This same herb had a reputation for providing a nasty hangover headache.

All varieties of sage need soil with fast drainage. Space young plants about 18 inches apart (twice that for Mexican bush sage) where they will receive plenty of sunlight. Pair sage with darker-colored herbs such as rosemary for color contrast.

Don’t overwater your sage. Too much water is the biggest cause of this herb’s death. Also avoid using sprinklers on them because this encourages spider mites to set up home in the plant interior. Combat any infestation with a light pruning and insecticidal soap. 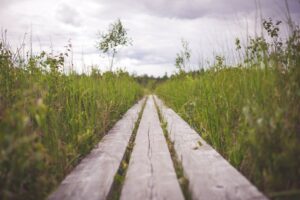